skip to main | skip to sidebar

PCG has recently posted an article discussing a case of a murder of a Jewish women in France in which the killer was judged to be not guilty due to his use of cannabis. Naturally this is a controversial and painful issue. In response PCG has written an article with the following lurid title, "Is It Murder If You Kill a Jew?" (January 27, 2020).

This title is irresponsible. While no fair minded person would even ask such a depraved question it is worth bearing in mind that there are extremists out there who hate Jews. Some of them just might say no to the lurid article title. We should not give them any reason to think their hatred of Jews is somehow justified in any way. It is shocking that anyone in PCG's 1% thought such a title for this article was a good idea.

Later the article states the following:


the hatred for the Jews is coming from ... Satan the devil.

Has this PCG writer thought through the implications of this statement? If Satan is causing some people in France to hate Jews then how can those Anti-Semites be blamed for they did while being supposedly under the influence of Satan? Such reasoning excuses Anti-Semitism and relieves bigots of responsibility for their actions.

Oh, what confusion and luridness Armstrongism has wrought upon the world!
Posted by Redfox712 at 4:50 AM No comments:

It is good that Harvey Weinstein has been convicted. It is terrible that a man with such power has committed so many horrific crimes for so long. Now the whole world knows he is a convicted criminal.

May all those guilty of such horrific crimes be brought before the courts of justice.
Posted by Redfox712 at 1:54 AM No comments:

So often PCG's 1% preach doom and gloom about so many things but somehow one ceremonial car ride of the President prompts PCG's 1% produce a fawning paean to President Trump. The PCG leadership heavily favors the Republican Party when discussing political matters.

With the crowd bellowing familiar chants of “U.S.A., U.S.A.” and “Four more years!” the president again took to the beast and led the pace lap. The president even picked up a radio and spoke directly to the drivers and pit crews. ...

The president is basking in a supreme moment of success. (Callum Wood, NASCAR and the Supreme Moment of Success, February 21, 2020.)


Considering that PCG also teaches that the United States will soon by conquered by a German led European Empire very soon one would have thought that PCG's 1% would not be so enraptured by the sight of their preferred president making an appearance in Florida.
Posted by Redfox712 at 2:41 AM 1 comment:

One PCG minister, Andrew Hessong, had a rather active Twitter account under the username @SupportEliakim. But no more. It is now offline.

He often made heated comments about political affairs, proclaiming his loyalty to President Trump despite numerous reports that he has done things contrary to PCG's stated teachings, denounce Democrats, bewail homelessness in California, allude to PCG's dogma that the State of California is cursed by PCG's God, state how great PCG is, etc.


Guess what San Bernadino, the government is planning Syrian Refugee settlement in your town.


It is amazing how accurate the Iron Lady was.


And people want to say this evolved.

But his Twitter account has now gone offline. We outside of PCG's 1% are left wondering why he chose to do so. Does PCG's God no longer approve of Andrew Hessong's tweeting?
Posted by Redfox712 at 6:48 AM 1 comment:

Look what PCG's demonization of Iran has led to. PCG presents the killing of Qassim Soleimani as more important than killing the leadsrs of Al Qaeda and ISIL.


PCG has spoken of Iran in a most bellicose manner for years. But at the same time PCG forbids their followers from serving in the armed forces so PCG members will not be on the front lines if war should happen to erupt with Iran. It is terribly hypocritical that PCG's 1% should be so bellicose while insisting that their followers must not go to war.

A war between the United States and Iran would terrible. It will not cause PCG's fearful predictions to occur. PCG does not know the future. Catastrophe is a real possibility and thereforei needs to be avoided.
Posted by Redfox712 at 3:34 PM 3 comments: 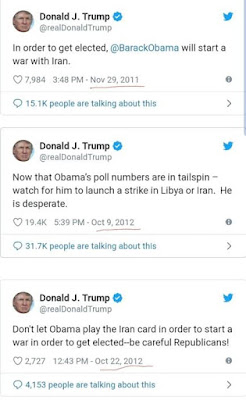 Before he became President Mr. Donald Trump speculated that Obama would launch a war against Iran to get elected in 2012.

Presently President Trump has apparently ordered a strike killing a prominent Iranian general, namely Major General Qassem Soleimani. Others have been killed in the bombing. No one really knows what this act will lead to.

Most of the Armstrongite COGs insist that it is Europe that is fated to attack the United States in the near future. This prediction suggests that the United States need not fear getting entangled in a war elsewhere in the world since it will be Europe that will conquer America and no other power. This is a false comfort. The COGs do not know the future. A cataclysmic war with Iran could occur. The real world cares nothing about the COGs prophetic speculations.

A war with Iran would be terrible. Many people will die. It would also silence calls for reform within Iranian society.

The COGs false comfort of certainty will be of no help if war with Iran should happen to occur. They help to make our society better instead of waiting for the Second Coming and recruiting new tithes paying members.
Posted by Redfox712 at 1:16 AM 2 comments:

The House of Representatives has impeached President Trump.

No doubt they will try to exploit this event to promote their false prophecies but such dire predictions are doomed to fail.
Posted by Redfox712 at 5:06 AM 2 comments:

If You are new please read this

Fall of Berlin Wall NOT Proof HWA was Right

It is often asserted that the fall of the Berlin Wall in 1989 proved that HWA was right and he really did see the future.

This of course is nonsense. Herbert W. Armstrong said that Christ would return within twenty years in his book Mystery of the Ages. (PCG has since deleted those words so someone in there knows HWA spoke nonsense.) How convenient for them to forget this.

Also Herbert W. Armstrong never said the Soviet Union would collapse. He thought it would survive intact until a few years after Christ's return. It shows how biased some many in the COGs are that they never seem to notice this. This inconvenient truth is just tossed into the memory hole.

It is true that HWA said that some Eastern European states would break away from Moscow's orbit and join the European Empire he said would arise at any moment. But he never talked of the Soviet Union collapsing. He did not teach that. Also he portrayed the rise of the European Empire to be far quicker then what has actually happened. In Mystery of the Ages Christ was supposed to return by 2005 at the most.

So assertions that the fall of the Berlin Wall somehow prove that HWA was right is just complete nonsense spread by people who, for whatever reason, are still in denial that HWA was a false prophet who merely talked out of his own "human reasoning".

What sort of man is he? A man who could say things like this.

"Mr. Armstrong has reminded us again that we are to disfellowship any members who attend GTA's [Garner Ted Armstrong's] campaigns, church services or other meetings. Some of our weaker members apparently do not realize that this man is in direct rebellion against God and His government! We must not allow them, or ourselves, to rationalize about this matter, to try to "help the underdog," or in any other way lend support to one whose gross immorality, whose long standing "play acting" and hypocrisy, and whose direct insubordination to the Government of God has long been and is now a source of confusion and DIVISION among God's people. So, as per Mr. Armstrong's instruction, I charge and exhort every one of you faithful ministers of the living Christ to explain this in no uncertain terms to your members, to warn them about this cause of division and then to disfellowship any who consort with GTA or any of his fellows." (Roderick C. Meredith, Pastor's Report, May 21, 1979, pp. 1-2.)

See here for this statement's context.

The Truth About Europe and Prophecy

Truth About The Key of David's Gerald Flurry and his PCG

I am a believer in Christianity. I wish to help people see the truth about Herbert W. Armstrong's teachings so people can be better informed about this belief system and its history.

WCG minister David Robinson had this to say about Roderick C. Meredith in a letter he wrote to him on September 19, 1979.

"During the ten years I have been an employee of the Worldwide Church, you have been poorly spoken of by most of the ministers and employees I have known. I vividly remember the absolute unbounded glee that was openly expressed by a good number of respected men in the church when you were first "shanghaied." [In 1972.] I could begin by naming names, which I am sure would shock you. I was one of the few who stood, where possible, for you. Your tenure as superintendent of ministers, as I believe the office was then called, was looked on as nightmarish. While you held office during the years of growth, most of those whom I know gave you very little credit for that growth. Almost everyone whom I know, whether they be former friends of yours, or continuing foes, recalls insensitive and terrible things you have done. Without exception, at least among my acquaintances, they all credit you with an unbridled lust for power and list you as one who is willing to pay the price of gaining that power, no matter what. I have, through many of the last few years, believed you had principles you would not violate. Many a man of experience in the church assured me of my error. Events have proven me wrong and them right. Mr. Armstrong has himself been widely quoted as saying of you that you were so righteous that you were so "righteous you were unrighteous." " (David Robinson, Herbert Armstrong's Tangled Web, Chapter 16, p. 207.)

Of course it is impossible for me to personally verify these assertions but people deserve to know what this knowledgeable man had to say about him.